I am back with three-day quote challenge! This time I am nominated by Richa from iScriblr (a few days ago). Thank you so much Richa, you have been doing really great, you have a fantastic blog.  This time the theme suggested is musical, so I am trying my hand on this. 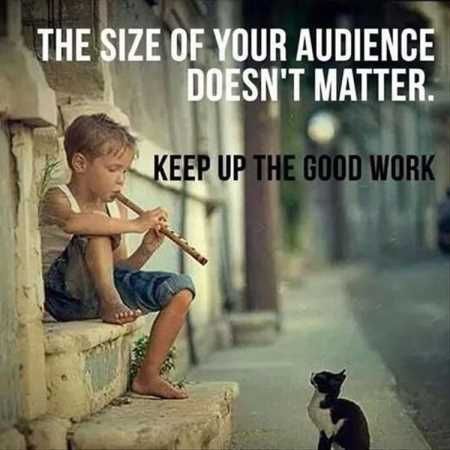 MY TAKE ON THE QUOTE

In true sense I feel that we should not really worry about number of our audience, but the performance. It goes with everything, even blogs!!

I am tagging: (Shhhhh, I will be back with this)

1 Thank the person who nominated you.
2 Post a quote for 3 consecutive days (1 quote for each day, can be a super short post).
3 Nominate three new bloggers each day.

With Lots of Love and good wishes!

I am back with three-day quote challenge! This time I am nominated by Richa from iScriblr (a few days ago). Thank you so much Richa, you have been doing really great, you have a fantastic blog.  This time the theme suggested is musical, so I am trying my hand on this.

Let me share with you, I love music almost all kind, like Sufi, Peppy songs, Hip-Hop, and slow romantic music. Once upon a time my music system used to play all the time 24 hours, yes 24 hrs. I used to sleep with keeping my headphones on or keeping my radio beside my bed (low volume). It used to play until the batteries used to get down.

MY TAKE ON THE QUOTE

Hehehe, for today instead of one I found two quotes,  I don’t think I really have to explain the reason why I chose the first quote. I have a taste for all type of music. But yes there are few songs which I don’t like. I sing the songs I love (and I don’t really care about my surroundings at times), and on peppy songs I dance, I love to hear Sufi songs and feel the connection with the Supreme. Folk music makes me happy. Sometimes music helps me in meditating!

The second quote is stating that the person who listens to all type of music is honest, creative and open-minded. Yes, I am all three, smarter..? I am not sure 🙂

I loved the rhythm in both the quotes from different people. Amazing!!

I am tagging: minzkhaitan, Karen , Sarah

1 Thank the person who nominated you.
2 Post a quote for 3 consecutive days (1 quote for each day, can be a super short post).
3 Nominate three new bloggers each day.

With Lots of Love!

The button was pressed,

The music was played,

Her body moved, with the rhythm that the music played,
The beats and the song all became one, as, she swayed,
The notes were high and sometimes low,
Her feet and hands sync with the flow,
She circled and jumped with the melody she played,
It was the song she loved always,
She swayed,
She danced until she gets fainted,
She loved the music, the lyrics, and the dance!
Today, I have decided to spend all my Sunday with my family and kids, they need it. Will read and write tomorrow. The song is my favorite theme for today, instead of just writing about the theme I am going to play a song and dance with my daughters. And if you too have Sunday morning right now, hang around with your family or friends. If you are reading it, do share what’s your plan, or how you spend your Sunday!
The has its own music and song try to listen to the melody!
Wish you a very Happy Life!!!!!

The stage was getting ready with last minute titbits arrangements, for the famous quartet. Although the lights, chairs and some decorations all was ready. Outside the auditorium audience was waiting in huge number, it was a famous four, their favorite, was going to play. Every individual audience has bought their tickets at a good price, but it was for the first time this band is going to perform in their city. All the whispers and chats between them showed how much they were excited. Their tickets checked, and everyone was sent to their designated seats.

The auditorium was all so noisy, it was full of people with excitement and confusion over their seats. But they were expecting to be entertained by the famous four quartets. Their expectations were high for tonight.

Now it was the time to roll the curtains up, and for the performance. Everyone now whispering about the delay.

On the backstage, three from the quartet were already here but one of them could not make it on time due to a flight delay. The manager decided to announce this news to the audience, having the fear of a big chaos. He noticed a new junior college quartet was waiting to meet the music director in a dressing room, backstage. Like a ray of sun, an idea struck in his mind. He approached the junior quartet if they can play some music in front of the audience. It was a big opportunity for them, they jumped with joy, and accepted the offer.

Without any announcement manager sent them on stage, he just tried to avoid the chaos.  Holding their musical instruments, the junior four sat on their chairs. Hummmm but you know the audience is not so ignorant, they just recognized that they are not famous four. The voice against this was raised, they were feeling being fooled. With a quick nod from the manager, they (junior four) started their music. As the music started, everyone in the audience again settled on their seats. Through their ears, the music was entering into their hearts.

After one another they played their notes, producing music that has a message for the world. The music worked as a charm, the listeners were taken away from their worries and all their sadness was tattered. The melody was producing a life in every heart of the audience, their souls were being touched with the enthralling musical notes they played.
The audience could feel the togetherness of their soul, their heart their body parts were dancing along with the tune. The music, they had never experienced before.

When we don’t have words, let the music speak, to the soul!